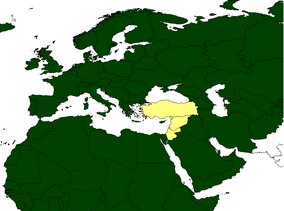 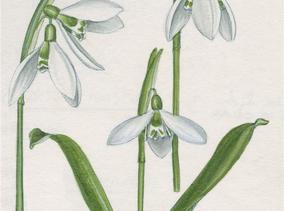 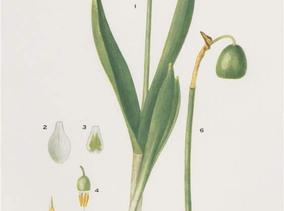 BULB ± spherical to ovoid, 2–2.5 x 1.8–2.1 cm. SHEATH 2–5 x 0.4–0.6 cm. Vernation supervolute. LEAVES narrowly oblanceolate to oblanceolate (broader in the middle to upper third), sometimes slightly narrowed at the base, (4–)8–14(–17) x (0.6–)1–2(–2.4) cm, during and after flowering developing in length and width, erect to recurving at maturity; midrib conspicuous to inconspicuous; margins flat;apex acute to acute-obtuse, hooded or infrequently flat; surfaces smooth, sometimes with two (rarely four) longitudinal folds (leaves bent slightly upwards or slightly downwards); upper and lower leaf surfaces ±the same colour, medium- to darkish green, or infrequently glaucescent, shiny or matt. SCAPE 8–16 cm long, green. PEDICEL 10–26 mm long. OUTER PERIANTH segments narrowly obovate to obovate, or ± elliptic, 18–26 x 10–15 mm, slightly unguiculate. INNER PERIANTH segments obovate to ± angular-obovate, or ± obtriangular, 12–14 x 6–8 mm, each segment with a sinus and two green marks, one apical and one basal, the apical mark-to U-shaped, sometimes divided into two smaller eye-like marks, the second (basal) mark at the base of and covering up to half of the segment, or often rectangular or ± elliptic, infrequently this mark divided into two longitudinally, often lighter in colour than the apical mark or yellow-green; inner face of each segment with a faint green mark similar to the mark on the outer face. ANTHERS tapering to a long point. CAPSULE ± spherical, 9–17 mm in diameter. SEEDS brown, c.5 mm long.

Flowers between January and April in nature; January to March in cultivation.

Notes: John G. Baker named G. fosteri in 1889, in honour of Prof. Sir Michael Foster (1836– 1907), the physiologist and iris enthusiast, who imported bulbs of this species from the province of Amasya, in northern central Turkey. Baker received bulbs of G. fosteri via James Allen, who was in the habit of sending new and interesting Galanthus to Baker at the Royal Botanic Gardens, Kew.

Galanthus fosteri is seldom confused with other Galanthus species. The leaves are supervolute in vernation, rather broad (c.1–2 cm wide) and medium to darkish green. Each inner perianth segment has both apical and basal marks, similar to those of G. elwesii and G. gracilis, but it seems that G. fosteri never possesses the large, more or less X-shaped mark that can be present in the aforementioned species. The apical mark is V- or U-shaped, and the basal mark usually more or less rectangular to elliptic, and often lighter in colour than the apical mark, or yellowish green.

Galanthus fosteri occurs mainly in central and southern Turkey, in the provinces of Samsun, Ordu, Amasya, Sivas, Kayseri, Adana, Gaziantep and Hatay (provinces north to south). It is also found in Jordan, the Syrian Arab Republic (Syria), Lebanon, and possibly Israel. This is much further east than populations of G. elwesii, and much further south than either G. woronowii or G. transcaucasicus.

Galanthus fosteri occurs in cool, north-facing, shady habitats at altitudes between 1,000 and 1,600 m. In the Lebanon, for example, Davis and Stern (1949) record this species growing on the ledges of shady limestone rocks, with scilla (Scilla cernua), in oak (Quercus coccifera) and terebinth (Pistachia terebinthus) macchie. Galanthus fosteri has been also recorded growing in grass, near melting snow, and in beech forest (Fagus orientalis). Once again, this is a species most frequently found on limestone rocks, although it also occurs on more acidic soils covering metamorphic rocks.

Galanthus fosteri is not common in cultivation, which is curious as it was introduced over 100 years ago in considerable quantity. Stern (1956) records that Max Leichtlin (see Chapter 10, Galanthophiles and Galanthophilia) imported ‘20,000 bulbs and six pounds of seed’. Most of the plants grown in the British Isles today are clones or second-generation seedlings of a collection made by the botanists Peter Davis and Ian Hedge (P.H. Davis & I. Hedge 26830). This collection was made in Turkey in 1957 on Damanli Dag, above Haruniye, in the province of Adana. Propagated material of the original Davis and Hedge collection can still be bought today from specialist bulb nurseries, and is sometimes listed in The RHS Plant Finder. This clone has proved to be quite durable but it is not a particularly good garden plant, as it is slow to bulk up and not very free-flowering. Selected plants from successive generations of the Davis and Hedge collection are sometimes better than the original gathering. More recent introductions, including collections from Syria, may make better garden plants.

Because it often fails to survive outside, G. fosteri is most frequently grown in pots under glass, where it will perform well. It is widely believed to be less hardy than most other species, but judging by the habitats where G. fosteri grows in the wild it should be cold-hardy in the southern counties of the British Isles, and it is worth trying in dry and sheltered parts of the garden. Some gardeners find that slug damage is a particular problem with this species, and extra care should be taken to protect the plants.