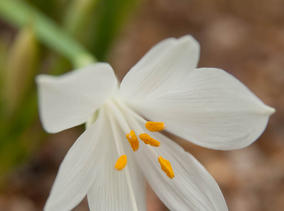 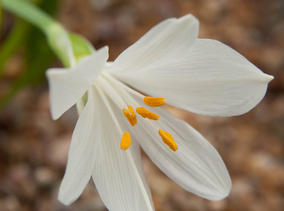 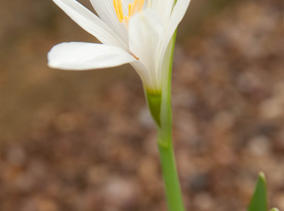 Flowering between January and February.

Notes: Sternbergia candida is, as mentioned above, most closely allied to S. fischeriana (now S. vernalis) from which it differs most obviously in its white, sweetly scented flowers which open to a wide bell or funnel-shape, revealing a wholly white interior except for the yellow or brownish anthers. The perianth segments are larger, 4.3-5 cm long and 0.9-1.8 cm wide, but usually only 2-3.5 cm long and 0.5-0.8 cm wide in S. fischeriana; the spathe subtending the flower is also longer in S. candida.

Some bulbs of this beautiful species were first collected out of flower in May 1976 by Oleg Polunin and it was not realised that they represented an undescribed species until they flowered in cultivation the following spring. Subsequently, Professor T. Baytop of Istanbul visited the same area and found it in flower on 14 January 1979. It is sad to note that, although apparently a rather local plant, some unscrupulous collectors have already gathered bulbs in sufficient quantities to make wholesale offers to the nursery trade in this country. The danger is that this type of behaviour will in time lead to new discoveries being published with such vague localities that it is a difficult and expensive task for others to find them; this would be a sad state of affairs from the point of view of botanists and those who like to observe and photograph plants in the wild without removing them.

Sternbergia candida grows at the edge of the cedar forests in Muğla province of south west Turkey in semi-shaded rocky ground. It appears to be hardy in Britain but is proving to be reluctant to flower freely, although the bulbs increase well vegetatively and propagation by this means is therefore not a problem. Probably a bulb frame affords the best method of cultivation where the plants can be satisfactorily dried off in summer and there is some measure of protection during the early spring flowering period.