The bulb genera Galanthus and Sternbergia belong to the family Amaryllidaceae (APG III) in the monocotyledons. Both are listed in Appendix II in CITES, which means that although they are not necessarily threatened with extinction, their trade is controlled. In particular, the trade in all parts of the plants and their derivatives is controlled except for: seeds, spores and pollen (including pollinia); seedling or tissue cultures obtained in vitro, in solid or liquid media, transported in sterile containers; cut flowers of artificially propagated plants. 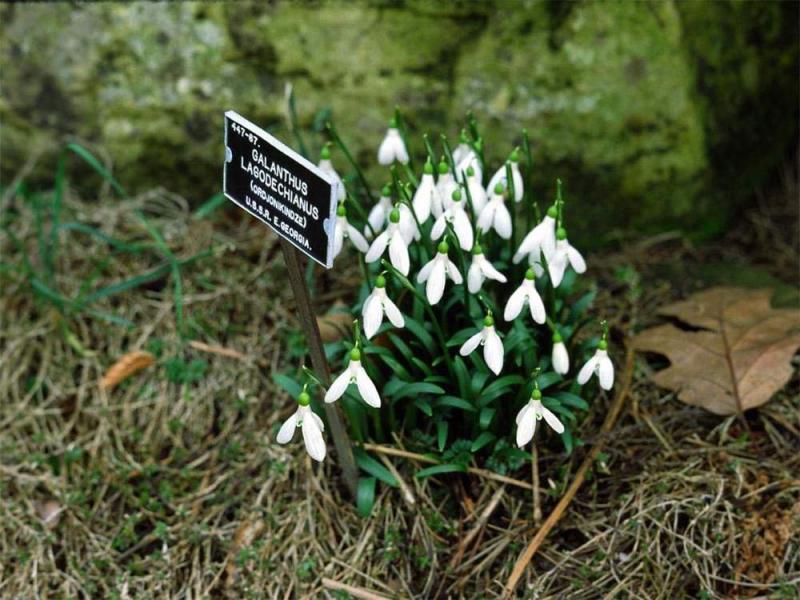 Galanthus L. contains 20 species, 4 subspecies and 4 varieties. It is distributed around Europe through Asia Minor and the Caucasus (World Checklist of Monocotyledons). Its westernmost limit is the Pyrenees, its eastern limit is the Caucasus and Iran and it extends southwards to Sicily, the Peloponnese and Lebanon. The northern distribution limit is virtually impossible to assess due to human introduction and cultivation (Davis, 1999).

It is one of the best known and most frequently cultivated bulbous plants. Its popularity is due to its beauty, hardiness, longevity and because it flowers when little else is in season. Additionally, it is popular because ofthe vast number of species, cultivars and clones available (Davis, 1999).

The genus Galanthus is closely related to the genus Leucojum L. However, they can be easily distinguished because Leucojum has flowers with 6 equal tepals, two to several flowers per scape and several leaves, whereas Galanthus has flowers with 3 inner tepals that are shorter and broader than the 3 outertepals, one flower per scape (rarely two) and two leaves per bulb (rarely three or more) (Meerow & Snijman, 1998; Davis, 1999).

Sternbergia Waldst. & Kit. contains 7 accepted species and it occurs from the Mediterranean to Eastern Europe, Asia Minor, the Caucasus and Iran (World Checklist of Monocotyledons), although species diversity is highest in the eastern Mediterranean (Gage & Wilkin, 2008). Some species are valued in horticulture and have become naturalized elsewhere. They produce mainly yellow flowers appearing in autumn, with the exception of S. vernalis (Mill.) Gorer & J.H.Harvey and S. candida B.Mathew & T.Baytop, where anthesis occurs in winter-spring, with the latter species possessing a creamy–white perianth (Gage & Wilkin, 2008).

Although most Sternbergia species can be differentiated by discrete taxonomic characters, S. lutea (L.) Ker Gawl. ex Spreng and allies S. sicula Tineo ex Guss. and S.greuteriana Kamari & R.Artelari, have been shown to be an exception (Gage & Wilkin, 2008). A recent morphometric study by Gage & Wilkin (2008) has shown that "as a result of the continuous variation shown in leaf width, tube length and perianth segment size and shape, it is not possible to differentiate the three existing species from each other".Therefore, it was suggested that the three taxa above should be regarded as a single species, S. lutea.

Sternbergia species are often confused with Crocus (Iridaceae) and Colchicum (Colchicaceae) because they all have erect, short-stemmed goblet-shaped flowers (Mathew, 1983). However, while Crocus has three stamens, Sternbergia and Colchicum have six stamens. In turn, Sternbergia has one style and an inferior ovary (seen as a swelling beneath the flower), whereas Colchicum has three separate styles with a superior ovary (hidden below ground) (Mathew, 1983).

Differences between Galanthus and Sternbergia are:

CITES or the Convention on International Trade in Endangered Species of wild fauna and flora aims to regulate and monitor the international trade in selected species of plants and animals to ensure that it does not endanger the survival of populations in the wild.

The international trade in listed species is regulated by means of a permit system which allows exporting countries to set trade at levels which they consider to be sustainable.

A State for which the Convention has entered into force is called a Party to CITES. Currently there are 175 Parties.

The species covered by CITES are listed in three Appendices, according to the degree of protection they need:

Appendix III contains species that are protected in at least one country, which has asked other CITES Parties for assistance in controlling the trade.