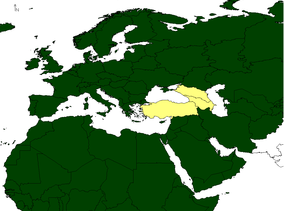 Notes: Galanthus alpinus var. alpinus is usually a rather diminutive species, particularly in cultivation. The leaves are quite narrow (usually 0.6–2.2 cm wide), and often shorter than the scape at the onset of flowering (e.g. 2–7 cm long). The green mark at the apex of each inner perianth segment is usually V- or U-shaped, and rather narrow and angular.

Galanthus alpinus var. alpinus occurs in the foothills of the montane zone (c.400 m) to the subalpine or alpine zone (c.2,200 m). It is found at the edges of mixed deciduous forests, with beech (Fagus orientalis), oak (Quercus spp.) and hornbeam (Carpinus orientalis, C. betulus), and with coniferous trees, such as oriental spruce (Picea orientalis), pines (Pinus spp.), Caucasian fir (Abies nordmanniana), and yew (Taxus baccata). It may also occur in scrub and by rivers and streams, most frequently on deep, rich soils overlying calcareous rocks.