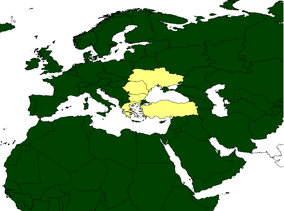 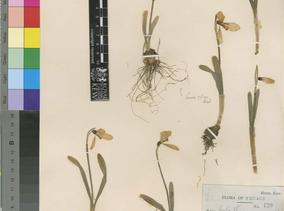 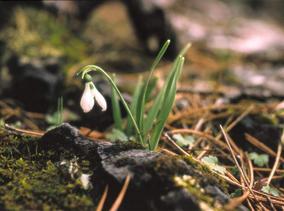 BULB ± spherical to ovoid, 1.4–2.2(–2.6) x 1–2.2(–2.6) cm. SHEATH 1.5–3 x 0.4–0.5 cm. Vernation applanate. LEAVES ± linear to very narrowly oblanceolate (slightly broader in the middle to upper third), at flowering (2.3–)5.5–16(–24) x (0.2–)0.3–1.2(–2.3) cm, after flowering developing to 5.5–16(–24) x 0.3–1.3(–2.5) cm, erect at maturity, usually twisted to conspicuously twisted (on the vertical axis); midrib conspicuous; margins flat; apex acute, flat to slightly hooded; surfaces smooth; upper and lower leaf surfaces ± the same colour, glaucous (grey to blue-grey) or infrequently glaucescent, matt. SCAPE 6–10(–18) cm long, glaucous. PEDICEL 10–32 mm long. OUTER PERIANTH segments obovate to broadly obovate, or ± elliptic, 16–26(–35) x 8–14 (–22) mm, slightly unguiculate. INNER PERIANTH segments obovate to ± angular-obovate, ± obtriangular, or ± oblong, 10–12 x 6–7 mm, the apices usually turned upwards (reflexed), each segment with a sinus and two green marks, one apical and one basal, or one large green mark, the apical mark variable, ± V- to U-shaped, sometimes divided into two smaller eye-like marks (either side of the sinus), the second (basal) mark at the base of and covering up to half or slightly more of the segment, or rectangular to ± circular, infrequently this mark divided into two longitudinally, or the apical and basal marks ‘fused’ to form one large ± X-shaped mark; inner face of each segment with a faint green mark similar to the mark(s) on the outer face. ANTHERS tapering to a long point. CAPSULE ± spherical, 10–15 mm in diameter. SEEDS pale brown, c.4 mm long.

Notes: The Czech botanist L.J. Celakovsky named G. gracilis in 1891, basing his description on herbarium specimens collected in Bulgaria. The epithet gracilis means graceful or slender in Latin, an admirable name for this species. In the past, G. gracilis has been known as G. graecus, for example in F.C. Stern’s Snowdrops and Snowflakes (1956), but this name should not be used because the type specimen of G. graecus represents G. elwesii and not G. gracilis (Brickell 1984).

Galanthus gracilis is easily recognized, even at first glance, due to its applanate vernation, and narrow, upright leaves, which are frequently twisted on the vertical axis giving the leaves a corkscrew-like appearance. In the wild Galanthus gracilis does not usually grow taller than about 10 cm, and its leaves are often no more than 7 mm wide, although some variants are much larger than this: specimens of G. gracilis occurring in western Turkey can be up to 18 cm tall (height of scape), have leaves up to 2.5 cm wide, and flowers 3.5 cm long. The inner perianth segments of G. gracilis can have the same type of marking as G. elwesii: that is, with either two separate marks (apical and basal) or one more or less X-shaped mark on each inner perianth segment. These markings are described in more detail in the discussion of G. elwesii. The inner perianth segments of G. gracilis are unique in wild Galanthus, because the apex of each inner perianth segment is curled upwards (‘flared’), to a greater or lesser degree. The inner surface of each inner segment, exposed in G. gracilis because the apex is curled upwards, is usually more strongly ridged than in other species, including G. elwesii.

The distribution of G. gracilis is similar to that of G. elwesii, and populations of each species may overlap in north-eastern Greece and the eastern Aegean Islands, Bulgaria and southern Ukraine. There are, however, differences in their distributions. In Turkey, G. gracilis occurs predominantly in the western Aegean, whereas G. elwesii is found mainly in the south, particularly in the Taurus Mountains. Herbarium specimens of G. gracilis can be mistaken for G. elwesii, and vice versa, and further field studies are required to pin-point the exact distributions of these two species.

Galanthus gracilis occurs over a broad range of altitudes, from the lowland zone (e.g. 100 m) to the subalpine zone (up to 2,000 m). Further south, such as in the eastern Aegean (e.g. Samos and western Turkey), G. gracilis is mostly a plant of mountains, commonly above or around 800 m. To the north, such as in northwestern Turkey and Bulgaria, it is usually found lower down, from 100 to 500 m. Galanthus gracilis is found in a wide variety of habitats, including mixed woodland and its clearings, in short grass, scrub (e.g. macchie), amongst rocks, on rocks and cliffs, in small valleys and by rivers and streams. Throughout its range it is commonly associated with mixed woodland, including oak (Quercus spp.), pine (Pinus spp.), beech (Fagus orientalis, F. sylvatica), oriental plane (Platanus orientalis), hawthorn (Crataegus spp.), and sweet chestnut (Castanea sativa). It is also found in macchie, with kermes or holly oak (Quercus coccifera), gall oak (Quercus infectoria), phillyrea (Phillyrea latifolia), rose (Rosa spp.), and Christ’s thorn (Paliurus spina-christi), for example. It is frequently found on, or at the base of, cliffs and large boulders, in pockets of soil in deep cracks, and on boulders where there is an accumulation of deep fertile soil. It often grows with ivy (Hedera helix), and cyclamen (Cyclamen hederifolium). Galanthus gracilis occurs on limestone, sandstone, and igneous and metamorphic rocks (e.g. granite and schist). In many regions it is found exclusively in locations that face due north, which are distinctly cooler and wetter than places with a south-facing aspect. Galanthus gracilis is mainly found in deep fertile soils, with the bulbs occurring at a depth of 10 to 20 cm.

Galanthus gracilis has not been collected in large numbers for the bulb trade, and this may be one of he reasons why it is not as common in cultivation as G. elwesii. There may have been less interest in G. gracilis at the time, but the more likely explanation is that G. elwesii was found in larger numbers, was easier to collect, and was a more amenable subject for the bulb trade (the bulbs of G. gracilis are generally smaller than those of G. elwesii). Today, national and international laws prohibit the wild collection of G. gracilis for the bulb trade. Galanthus gracilis ranks among the finest snowdrops for the garden, and there are a number of excellent variants available from specialist bulb nurseries. Some of the best are very small plants, with the characteristic narrow, twisted, almost grasslike leaves, and plentiful flowers. Galanthus gracilis ‘Highdown’ is a good example, but there are a number of similar clones that do not have cultivar names. There are also very large variants of G. gracilis, with substantial showy flowers, such as those originating from the province of Izmir in western Turkey. Study of wild populations indicates that this species has the potential to provide a great variety of gardenworthy cultivars. For example, in north-western Turkey it is possible to find variants with greenish outer perianth segments and all-green inner perianth segments, rather like a G. gracilis version of G. nivalis ‘Virescens’. The ability of G. gracilis to produce viable seed in cultivation is a further attribute of the species.