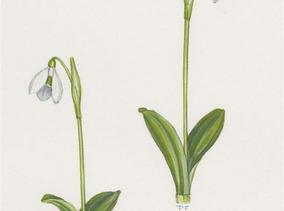 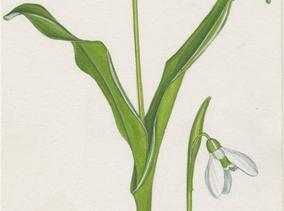 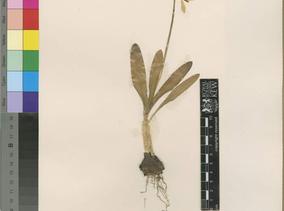 Notes: Galanthus ikariae was first gathered from the Aegean island of Ikaria, in Greece, by collectors sent out by Edward Whittall of Smyrna, who sent living specimens of G. ikariae to James Allen. After seeing it in growth Allen was convinced that it represented a new species, and sent a piece of leaf to J.G. Baker at the Royal Botanic Gardens, Kew, in February 1893. This was followed by dried specimens sent to Kew directly by Whittall. In April 1893 Baker described G. ikariae as a new species of snowdrop, naming it after the island of Ikaria at Whittall’s request. Ikaria is in turn named after Icarus, who in Greek myth escaped with his father Daedalus from King Minos in Crete by making wings of feathers fastened with wax. Icarus flew too near the sun and the wax in his wings melted, plunging him to his death in the sea. He was buried on the small island that later bore his name as Ikaria or Nikaria.

Galanthus ikariae has supervolute vernation, broad (c.1.5–2.5 cm wide) green leaves, and a single large green mark at the apex of each inner perianth segment. The inner segment mark is often the easiest character by which to distinguish G. ikariae from other similar-looking species with broad, green leaves, particularly G. woronowii with which it has often been confused. In G. ikariae the inner perianth mark is large, and usually covers more than half the length of the segment. In G. woronowii and G. transcaucasicus the mark is relatively small, and is mainly confined to the apex of the segment. Another obvious difference between G. ikariae and G. woronowii is the colour of the leaves, which are medium- to darkish mattgreen for G. ikariae, and light to medium-green for G. woronowii. The leaves of G. transcaucasicus are usually more or less the same colour as G. ikariae. There are also clear differences in leaf anatomy between G. ikariae and G. woronowii, as reported by Davis and Barnett (1997). It is not within the remit of the present book to go into great detail on leaf anatomy, but a simple test can be performed, without specialist equipment, should other means of identification fail to distinguish these two species. If one cuts a leaf of G. ikariae in half, with a scalpel or pair of scissors, at a right angle to the midrib, it is possible to see air spaces along the width of the leaf. These air spaces are big enough that a dressmaker’s pin may be pushed inside without rupturing the delicate tissue of the leaf. The corresponding air spaces in G. woronowii (and most other species with broad, green leaves, such as G. platyphyllus, G. krasnovii, and G. transcaucasicus) are very small, and barely discernible to the naked eye.

Galanthus ikariae is endemic to the Aegean Islands of Greece. Since its discovery on the island of Ikaria it has been collected from three other Aegean islands, namely Andros, Naxos, and Skyros, and further collections have been made on Ikaria. Recently, there have been rumours of G. ikariae growing in western Crete, although these sightings have not been confirmed.

In nature, G. ikariae is mainly confined to humid, cool, shady places at altitudes of 600–900 m. Unlike many other species of Galanthus, it does not occur in areas with very cold winters, or even in places with prolonged cold spells. A common habitat is in the bottom of small, wooded river valleys and gorges near water, usually in quite deep shade. In these habitats it can be found either on the sides of the river valley, or at the bottom in very deep, rich soil. When the river is at its highest it can even be found growing in running water. The vegetation in these habitats is luxuriant, with a relatively tall canopy of deciduous trees and a rich and varied herb layer, often with masses of ivy (Hedera helix), and plentiful cyclamen (Cyclamen hederifolium). Galanthus ikariae is not totally confined to river valleys, however, and populations can be encountered in scrub and on the edge of woodlands. On Skyros, for example, G. ikariae can be found in the shade of macchie, with the Cretan maple (Acer sempervirens). It is also found in the shade of large boulders, between rocks, and at the base of rocky outcrops. In all habitats, G. ikariae is most frequently recorded on soils overlying either limestone or metamorphic rocks, such as schist.

The overall size of plants, leaf colour, and inner perianth markings are variable characters in wild populations of G. ikariae. In humid and shady situations where the soil is rich and moist, the leaves can be up to 50 cm long and 2.5–3 cm wide, medium-green in colour. In drier, more exposed places they may be only 10 cm long and 1–1.5 cm wide, and darkish matt-green in colour. In cultivation, specimens collected from the former type of habitat will take on the characters of the latter, showing that this variation in size and colour is determined by the environment. The inner segment markings may also vary quite considerably, even within populations. The mark is always large, reaching either to half-way up the segment or more usually beyond half-way. The marks can sometimes be rounded at the top or blunt, which gives them a rather square outline. As with most species, occasional specimens occur with small green marks at the tip of each outer perianth segment.

The name G. ikariae subsp. latifolius is sometimes seen in the literature and in bulb catalogues. This name should not be included with G. ikariae as it is a synonym of G. woronowii, a species from north-eastern Turkey and the western Caucasus.

During the first half of the twentieth century G. ikariae seems to have been fairly well known in cultivation. It was, for example, included in many articles on snowdrops at that time, including those by the plantsman E.A. Bowles (1918), and the iris expert W.R. Dykes (1919). In the late 1950s, the Giant Snowdrop Company offered it for sale in their catalogue at four shillings per bulb. Galanthus ikariae is rather scarce in cultivation today, however, and the true plant is only infrequently seen in specialist bulb and snowdrop catalogues. Over the last twenty years or so, the majority of G. ikariae offered for sale in bulb catalogues were in fact G. woronowii. The reason for its infrequency in cultivation is not clear. Nutt (1974) comments that ‘it has rarely been collected but it seeds so easily in gardens that it should be far more common than it is.’ This is certainly true, and I have seen large groups of G. ikariae (up to 500 bulbs) that have apparently grown to their present size mainly through multiplication by seed. One possible explanation for the scarcity of the species is that it may not be as hardy as most other snowdrop species, so that plants are killed or damaged during severe winters. It does appear to grow successfully in milder districts, such as in the southern and western parts of the British Isles, and in warmer microclimates in cities and towns. It grows well in London, for example, and in the southern and western parts of Ireland. In nature, G. ikariae does not experience long, cold winters, and it does not grow at altitudes high enough for it to experience numerous days of temperatures near or below freezing, as is common for other species of Galanthus from similar latitudes.

Most specimens of G. ikariae in cultivation today resemble the plants illustrated in Curtis’s Botanical Magazine (Turrill 1937), and the photograph in M. Rix and R. Phillips’ Bulb Book (1981). A plant very similar to these illustrations has been referred to as G. ikariae ‘Butt’s Variety’.