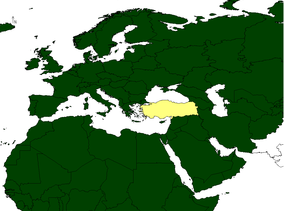 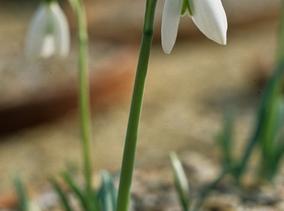 
Notes: Galanthus peshmenii was described in 1994 by A.P. Davis and C.D. Brickell, and named in honour of the Turkish botanist Hasan Pesmen (1939–1980). It was probably first collected in 1973 by the Greek botanist E. Stamatiadou, from the Greek island of Kastellorhizo (Megisti). This was followed by a collection made on the Turkish mainland in 1978, by H. Pesmen, B. Yildiz and O. Günes. Martyn Rix introduced it into cultivation in the British Isles in 1974, from collections made on Kastellorhizo. Prior to its formal description G. peshmenii was mostly referred to as ‘(Turkish) G. reginae-olgae’ (e.g. Brickell 1984).

Galanthus peshmenii is an autumn-flowering species, flowering in the wild and in cultivation during October and November. The flowers are produced before the leaves emerge from the soil, or when the leaves are only 1–3 cm long, in the same fashion as G. reginae-olgae subsp. reginae-olgae. The vernation is applanate, and the leaves are characteristically long and narrow at maturity (3–5 mm wide and up to 30 cm long), and have a flaccid appearance when fully developed, particularly in the wild. The upper surfaces of the leaves are glaucescent to almost glaucous, and sometimes have a faint glaucescent (grey) central stripe. The flowers possess a single green mark at the apex of each inner perianth segment, which may be V- to U-shaped, or heart-shaped, or consist of just two green spots either side of the sinus. The mark can be quite small and narrow, or rather large and covering up to, or just over, half the length of the inner segment. In terms of vernation, flower marking, and flowering time, G. peshmenii is very much like G. cilicicus, but differs from this species by its leafless, or near-leafless, flowering habit and long, narrow leaves. Galanthus peshmenii is also similar to G. reginae-olgae subsp. reginae-olgae, because both flower in autumn without their leaves, or when the leaves are very short (e.g. 1–3 cm long). These species are easily distinguished, however, because G. peshmenii has leaves that are glaucescent to almost glaucous, not green to glaucescent with a prominent grey central stripe as in G. reginae-olgae. The leaves of G. peshmenii are also narrower, and usually longer, than those of G. reginae-olgae.

Galanthus peshmenii has a very restricted distribution in the wild, being known only from a small area in the province of Antalya in southern Turkey and on the nearby Greek island of Kastellorhizo (Megisti). Like G. cilicicus it is mainly associated with limestone outcrops and cliffs. On Kastellorhizo, a typical hot, dry Aegean island, G. peshmenii grows almost exclusively as a chasmophyte, on north-facing cliffs and rock outcrops. It is also found very close to the sea, sometimes only 10 m from the sea-shore, and as little as 5 m above sea-level. Pockets of soil in rock fissures, hollows and holes provide suitable niches for its existence, and afford protection from extremes of temperature and climate. The plants are often some height from the ground, and are frequently located in inaccessible places, sometimes even out of the reach of goats, which are known to eat Galanthus leaves. The soil pockets always go deep into the rock, and bulbs may be found 20 cm or more below the rock surface. At this depth the bulbs will remain cool, even during the long hot summer months. On the Turkish mainland, G. peshmenii is not found in habitats as extreme as those on Kastellorhizo, but still frequently occurs on or amongst limestone rocks. It occurs there in sparse pine forest (Pinus spp.), under kermes or holly oak (Quercus coccifera), in macchie vegetation, and in scrubby areas below limestone cliffs. It is nearly always found in shady areas, often in deep leaf mould, or other humus-rich soils. Sometimes the bulbs are found quite close to the surface (J. Lebsa pers. comm. 2000). Galanthus peshmenii was previously thought to be a low-altitude species, occurring from almost sea-level to 300 m, but further field studies (e.g. J. Lebsa pers. comm. 2000) have shown that it occurs at altitudes up to c.1,000 m.

Galanthus peshmenii is not a very easy species to grow outdoors, and most plants in cultivation in the British Isles are grown in pots kept in cold frames and alpine houses. The hardiness of G. peshmenii has not been widely tested, but it seems as if this species does not like the relatively wet and cold conditions of the British Isles.