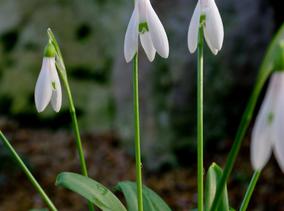 Notes: Galanthus woronowii was named by the Russian botanist A.S. Losina-Losinskaya in 1935, in honour of the botanist and plant collector Georg Jurii Nikolaewitch Woronow (1874–1931). Losina-Losinskaya described this species using plants collected in southern Russia, near the town of Sochi on the eastern shores of the Black Sea. Galanthus woronowii can still be found growing in great abundance in areas of native forest in the hills and mountains above Sochi.

There has been much confusion over the identification and naming of G. woronowii, and often the correct name is still not used. In the past G. woronowii has been known erroneously as G. latifolius, G. ikariae, or G. ikariae subsp. latifolius. True G. latifolius (now known as G. platyphyllus) is a species of the central, high Caucasus; and G. ikariae is restricted to the Aegean islands of Greece. It is understandable that these three species have been confused, however, as they all look quite similar to the untutored eye. Galanthus woronowii, G. ikariae, and G. platyphyllus all have supervolute vernation, broad green leaves, and one green mark at the apex of each inner perianth segment. Galanthus krasnovii and G. transcaucasicus also share these characters, but are rarely confused with G. woronowii, probably because they are still rare in cultivation. Closer inspection shows that the three species in question are very different. Galanthus platyphyllus has three obvious characters that separate it from G. ikariae and G. woronowii: the bulbs are elongated and more or less club-shaped, the inner perianth segments lack a sinus, and the tips of the anthers do not have a distinct pointed tip. In G. ikariae and G. woronowii (and G. transcaucasicus) the bulbs are more or less spherical or ellipsoid, each inner perianth segment has a sinus, and the anthers have a distinctly pointed tip (as in all other Galanthus species). Galanthus woronowii differs from G. ikariae in its smaller inner segment mark, and in having light to medium-green leaves. The inner segment mark of G. woronowii is short, and is confined to the lower half of the segment; the mark in G. ikariae is large and covers up to and usually more than half the length of the segment. The leaves of G. woronowii are light to medium-green, sometimes slightly yellowish, and usually glossy or slightly shiny, whereas those of G. ikariae are medium- to darkish green, and usually matt. There are also less obvious differences between these two species, such as in their leaf anatomy. Galanthus woronowii, G. ikariae and G. platyphyllus occur in different habitats, and their distributions do not overlap. Another distinguishing feature of G. woronowii is that the leaves are frequently folded, particularly in young non-flowering shoots. This is a feature of other broad-leaved snowdrops, including those mentioned immediately above, and species with glaucous leaves such as G. elwesii; but it is particularly marked in G. woronowii. The leaves have two, or infrequently three or four, shallow furrows on the upper surface, which correspond to the same number of folds on the lower surface. These leaves have a distinctive folded or almost pleated appearance. This is not the same type of folding as in G. plicatus, however, where the leaves are distinctly folded towards the under surface of the leaf. The type of green mark on the inner perianth segments can be a distinctive feature for G. woronowii. The mark is frequently very straight at its basal end, giving a characteristic ‘flat top’ appearance; but quite often it is also more or less U-shaped. The marking is sometimes quite small, and can be reduced to two small green angular marks at the apex of the segment, one on each side of the sinus.

Galanthus woronowii mainly occurs in the Pontus Mountains in north-eastern Turkey, and in the western Caucasus (eastern Georgia and southern Russia), around the eastern part of the Black Sea coast. It is found with less frequency in the central Caucasus (Georgia), and only rarely in the northern Caucasus (Russia). The largest and most extensive populations probably occur in Georgia, in the provinces of Adzhariya (near Batumi) and Abkhazia, and in southern Russia in the vicinity of the Black Sea resort town of Sochi. In the hills surrounding the town of Batumi G. woronowii is often plentiful, and can be found growing in fields, in ditches, and on agricultural terraces. In fact, because there are so many plants there, from the late 1990s onwards millions of G. woronowii bulbs have been collected from Georgia to supply the trade demand for wild-collected Galanthus. There are numerous populations in north-eastern Turkey, but these seem to be smaller and less frequent than in Georgia and Russia. International and national laws (e.g. CITES) regulate the trade in propagated and wild-collected G. woronowii.

Galanthus woronowii is a low- to mid-altitude species, occurring from 20 to 1,500 m but more usually from 200 to 600 m. In north-eastern Turkey it is most often found at altitudes between 100 and 500 m, but in Georgia and Russia it is more frequent at slightly lower altitudes, between 100 and 700 m. These areas normally experience cold winters, and high rain- and snowfall. Usually the snow has mostly melted by April or May, when G. woronowii and many other forest-floor herbs will be in flower. This is in sharp contrast to the high central Caucasus, home of G. platyphyllus, where the snow may not melt until August or September. The variety of habitats for G. woronowii is remarkable. It is commonly found in mixed deciduous woodlands of beech (Fagus orientalis), hornbeam (Carpinus betulus, C. orientalis) and oak (Quercus spp.). Near Sochi, in southern Russia, it is often found in forest dominated by yew (Taxus baccata) and box (Buxus sempervirens). It also grows in woodlands of pine (Pinus spp.) and Caucasian fir (Abies nordmanniana). It can be found growing with hellebores (Helleborus orientalis), peonies (Paeonia mascula), orchids (various species), cyclamen (Cyclamen coum), scilla (Scilla spp.), and in Russia with Erythronium caucasicum. It is not confined to woodlands, however, and in regions with high rainfall may occur on top of large rocks, in scree, on cliff ledges, and even epiphytically on moss-covered trees. Galanthus woronowii is another species found predominantly on limestone, but it also occurs on other substrates. Unlike most Galanthus species, G. woronowii can be found on relatively shallow soils (e.g. 3–5 cm deep), even over solid rock, but only in cool, shady areas in districts that receive high rainfall. It is also found in deep loam, and deep humus-rich soils.

In the Russian Black Sea Coast area there are at least two ecological variants of G. woronowii (pers. comm. S. Lebedeva & B. Turniev 1991). One known as the ‘woodland form’ grows in woodland and is recognized by its medium-green leaves that lie flat to the ground, and by a flower scape that is longer than the leaves at flowering time. The other, known as the ‘rocky form’, occurs on rocks, scree and cliff ledges, and is characterized by light green, erect leaves that are as long as or longer than the flower scape at flowering time. The ‘rocky form’ can have leaves up to 35 cm long and 3 cm wide, although these dimensions are rarely maintained in cultivation. The main differences between the two variants are more or less stable and persist in cultivation, but the salient features are less marked than in plants growing in the wild. Variation in the number of outer perianth segments may occur in natural populations, and up to 50 semi-double flowers have been recorded growing amongst fewer than 1,500 regular, single-flowered G. woronowii. Sometimes it is possible to find individuals with a small, faint green mark at the tip of each outer perianth segment.

Galanthus woronowii was introduced into cultivation more than 100 years ago, under the name of G. latifolius. An article by M.T. Masters in 1881, for example, in the Gardeners’ Chronicle, shows a figure of ‘G. latifolius’ that is undoubtedly G. woronowii. After the first introductions it was probably not grown in very large numbers until the latter part of the twentieth century, when introductions from the wild were more common. It is now, however, becoming increasingly more widely grown and appreciated, and is likely to been seen in considerably larger numbers due to imports from Georgia via bulb firms in the Netherlands.

Galanthus woronowii is an attractive and robust garden subject, although it should be stressed that some clones are more reliable in cultivation than others. The bright, fresh-green leaves are a welcome contrast to the other commonly cultivated species, such as G. elwesii, G. nivalis, or G. plicatus, which have glaucous or glaucescent leaves. After flowering the leaves stay fresh-looking, and depending on the clone selected, can provide a neat ground cover. Galanthus woronowii is certainly the easiest to grow of the species with broad, green leaves, faring much better in British gardens than G. platyphyllus, G. ikariae, G. krasnovii, or G. transcaucasicus.