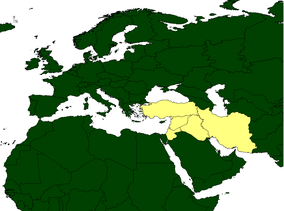 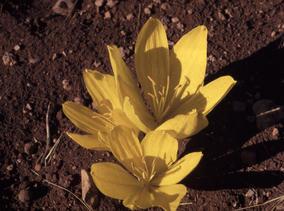 Flowering between October and November.

Notes: This, the largest-flowered species of all, has long been known to gardeners and, like so many other excellent bulbs, reached Europe in the sixteenth century by way of Istanbul. It was known to Clusius and to Gerard as Narcissus persicus or the Persian daffodil, and the vernacular name of “Zaremcada” or “Zaremcatta” is also recorded for it. In spite of the long history of cultivation it has always been somewhat of a rarity in gardens and does not thrive unless given the controlled environment of a bulb frame or alpine house. In the wild the huge goblet shaped flowers of S. clusiana are produced in the autumn at the end of a long warm dry summer and these conditions must be reproduced if regular flowering is to be expected.

It is a common and widespread species in the eastern Mediterranean and has been recorded as far west as the Aegean Island of Samos: thence it occurs eastwards through southern Turkey, southwards to Israel and east through Jordan and Iraq to Iran. The habitat is usually in open fields and sunny hillsides, often on heavy chalky or limestone soils.

The large bulbs (somewhat larger than those of hybrid daffodils) are deep-seated in the soil, certainly below plough level when it is growing in cultivated fields. Unlike all the species so far described S. clusiana produces its autumnal flowers before the leaves, these emerging some considerable time after and often not until the spring, when the large capsules also appear at ground level. As in the next species, S. colchiciflora, these capsules remain more or less stemless and contain seeds which have a large fleshy white attachment, correctly known as a strophiole. I do not know the mechanism of seed distribution in S. clusiana but it seems likely that they are removed by ants immediately they are ripe, as I have observed several times in S. coichiciflora.

The broad leaves of S. clusiana are very distinctive, being grey-green, erect and twisted, and they are flat, not channelled. There is considerable variation in the size and number of leaves and in flower size but I think this is largely a measure of the vigour of a particular plant; in Turkey I have seen populations of very large-flowered plants growing on flat comparatively rich fields, while on neighbouring dry chalky hills they had much smaller flowers. This provides an answer to the extreme variation noted in the description above in the size of the perianth segments (3.7-7.5 cm long); small-flowered forms from Iran were described in 1882 as S. stipitata, whereas larger Turkish ones were given the epithet S. macrantha by J. Gay. There is also a certain amount of variation in the flower colour, from a rather greenish yellow to deep clear yellow.

Sternbergia clusiana is a most beautiful plant when growing well; I have seen bare fields in Turkey full of the huge leafless golden goblets in November but unfortunately it never looks quite the same in cultivation!