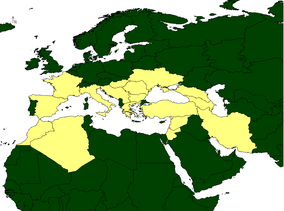 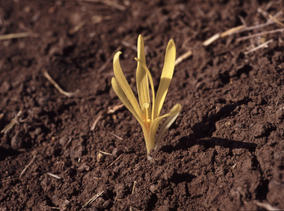 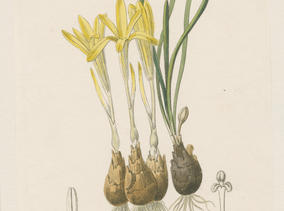 Flowering between September and November.

Notes: This is the smallest-flowered and least attractive of the species, producing its almost stemless tiny shuttlecock-shaped flowers in early autumn before the narrow leaves appear. There is even evidence [see Flora USSR 4:489 (1935)] that sometimes the flowers do not appear above ground but instead mature within the bulb, and the first sign of there having been any is when the fruits are pushed up to ground level in spring. I must admit to being rather sceptical about this, having cultivated the species and seen it growing wild in many places. The flowers are very short lived and may be visible for only a day or so, and they are fairly insignificant; the pale yellow narrow perianth segment make it very easy to overlook among the pieces of dried vegetation left over from the dry summers of the regions it inhabits.

Sternbergia colchiciflora occurs over a very wide area of southern Europe and western Asia from south Spain eastwards through Sicily, the Balkans and Turkey where it is very common, southwards to Israel and northwards to the Crimea and Caucasus; in the east it reaches as far as Iran. There is surprisingly little variation over this large area, perhaps the most obvious being in the length and breadth of the perianth segments; some variants have very narrow ones only 2 mm wide, giving the whole flower a very flimsy appearance. In those forms with the widest segments it can however be quite an attractive little plant, especially if several bulbs are grown closely together in a pot in an alpine house or frame where they can be viewed at close quarters. S. colchiciflora produces seeds very freely in cultivation, so is easily propagated.