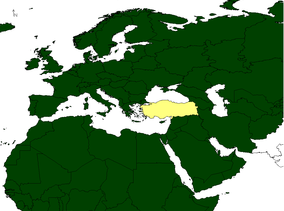 Notes: Sternbergia schubertii is somewhat of a mystery since it has not been recollected at the type locality. It is somewhat similar to S. sicula and could possibly represent an atypical form of that species although the differences are quite marked. The main distinctions, taken from the original dried material in Munich, lie in the comparative lengths of the perianth tubes, 1.5-1.8 cm in S. schubertii and only 1 cm or less in S. sicula, and in the size of the segments; in S. schubertii they are somewhat longer and narrower as shown in the key and in the descriptions above. Although Professors A. and T. Baytop recently revisited Torbali in November 1981 and collected sternbergias, their specimens represent fairly typical S. sicula, with the short tubes and shorter broader segments. In the absence of any material other than the type we can only accept the facts as they are: that the specimen of Roth’s in the Munich herbarium does not agree sufficiently well with S. sicula for S. schubertii to be regarded as a synonym, unless of course it was but an aberrant, non-persistent variant in a population of S. sicula.